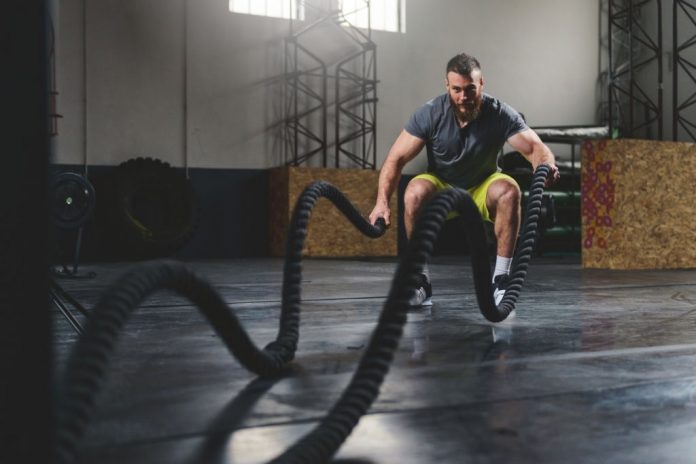 Battle ropes have been around the corner since the mid-noughties. Since then, the use of this prop has experienced an incline in the graph. There are several reasons why people adopt battle ropes. Holding these heavy ropes and making that move which seems very simple and intriguing on the outside, actually seizes the whole body’s strength, particularly arms. Throwing up battle ropes in the air isn’t as easy as it looks.

Being a ruthless workout, it has helped a humongous populace gain the momentum of their fitness. Rope workout is more sought for these days than anything else because it is efficient for the whole body. Let us look in detail at what does battle rope workouts do for fitness enthusiasts.

Mastering the Battle ropes your way

Rope battles are majorly known for the quintessential characteristic wave exercise. Darting your eyes on the waves formed as the role is lifted and thrown with a mighty push is simply a pleasure to the eyes. But, it is the opposite for the person doing it. Here’s a quick peek into the lady’s stature who set a world record with the majestic Battle ropes.

Rhian Cowburn, the co-founder of the famous gym Strong+Bendy, established a place in the book of Guinness World Records by breaking the men’s time by waving the Battle ropes for an hour. It is undoubtedly excellent! With that motivation your way, here are some of the tips you can consider to master the battle ropes workout:

●     Grip it Right: the real game-changer is the grip of the battle ropes. An excellent battle ropes workout is determined by the way the athlete holds the rope. The better and stronger the grip, the more efficient is the rope workout. Let’s see what the battle lady has to say about the hold- ” the ideal grip is the hand and fingers on the handle. But, with the thumb off the handle on the rope itself, with your hands facing each other.”

She also asserts, “I often see people holding the handle tight at the end. This is a no-no because it means you cant flick the wrist. Also, if you’re working up to endurance sets, your hands will get sweaty, and the rope could end up slipping out of your hands.” With that being said, you should practice maintaining a firm group of ropes before starting the

●     Take the position: Once the grip is firm and confident of your grip’s strength, you should work on your stance. The feet should be placed slightly wider than the shoulder width. Chest up, back straight, and bend forward.

●     Not a tug war: remember, the point is to flick the ropes in the air and not fight a rig war against an opposing team. People tend to tug the rules towards themselves. This doesn’t create the wave and is not an efficient manner to do the battle ropes workout. Even Cowburn has noticed this standard error if tugging the ropes towards yourself instead of flicking them into the air.

●     Get the dimensions right: the size, length, thickness of the ropes vary from person to person. Otherwise, what does battle ropes workout get you anyway? Study the ropes meticulously and choose the right one for yourself. I’d the string doesn’t reach the anchor point, it’s not the correct fit. Start with a 9 meters long, one with ⅕ inches thickness for a considerable workout session in the beginning. Gradually you can proceed towards a 12 m long rope and if you really feel the need for it, notch up the thickness to 2 inches, maybe!

●     Don’t crawl forward: while doing the battle ropes exercises, the individual tends to creep forward. This comes as a massive mistake, although unnoticeably. Gradually, doing so puts a lot of pressure on the person doing the battle ropes workout and thus finds it difficult to carry forward for a long time.

Placement of battle rope exercise in your workout routine can vary according to the requirements of the person. You can either kick start your workout with battle ropes or include them in the middle of the workout session. If not that, put them at the end of the movement to be pronounced as finishers. Battle ropes workout is optimum for pumping your heart rate and thereby burning a lot of calories. Let us look at the different ways you can use battle ropes.

This battle ropes exercise also betters your posture muscles. The impact of this exercise is such that it works up the upper, lower, and even the middle traps alongside rear delts. Not just that, your shoulders will experience a burn within just 30 seconds.

Battle ropes workout for your core

With the completion of the discussion of the different types of workouts for other body areas, let us move ahead to talk over the benefits of battle ropes workout.

●     Fat burners: stating that a 10 minutes workout with battle ropes can burn up to 112 calories, the research published in the Journal of Strength and Conditioning Research has proven to be music to the fitness lover’s ears. Fat burning is the primary role of any high-intensity workout. And so is this one. When ropes are used for High-intensity interval training (HIIT), these come across as cardiovascular fitness rockets because of the speed at which they expedite the fat burning procedure.

●     Boost mobility: the range of motion is improved with the battle ropes workout. Regular exercise with the battle ropes will boost body organs’ mobility, especially the shoulders, arms, core, knees, hips, and even ankles with feet. Increased mobility is beneficial for other workout sessions and daily routine work. It gives the person additional overall strength.

●     Carve muscles: old muscles come into action, and new powers are carved meticulously with the help of a battle ropes workout. The benefits of battle ropes are enormous. Specific forces that are not counted as a part of other workout exercises are taken care of in the battle ropes exercises. In a sequel of all the slams, throws, waves, whips, and whatnot, a whole-body workout is carried out with much precision and efficiency using the battle ropes.

●     The probability of injuries is reduced: with no tough and explicitly strong equipment used, battle ropes are the best tools for working out with high intensity. The ropes cannot harm you much. Heavier loads are not always preferable for high-intensity workouts. Battle ropes work out is not that heavy weighted and does not pose any serious threat to the athlete.

●     Fun along the way: with so many variations to choose from, the battle ropes can come along as a fun prop to do exercise every day. Chuck the monotonous routine workouts of dumbells and heavy fixated machines of the gym. Adopt the fun and easy-to-use battle ropes for a lucrative workout session.

To build strength and power check out this complete strength workout program.

The scope of using battle ropes is as long and robust as the strings themselves. Battle ropes came into existence in the early 2000s and haven’t seen away since then. They have even taught in the routine of various fitness enthusiasts around the globe. Battle ropes workout has enormous benefits, and efficiency is to die for. They are hoping that the blog helped with your queries and was informative enough, taking a leave!

Why and How to Boost Testosterone To Increase Muscle Mass

Why Avoid Using Gear in Bodybuilding

Four pre-conception health tips for women who want to try

6 Healthy Habits to Have in Your 30s