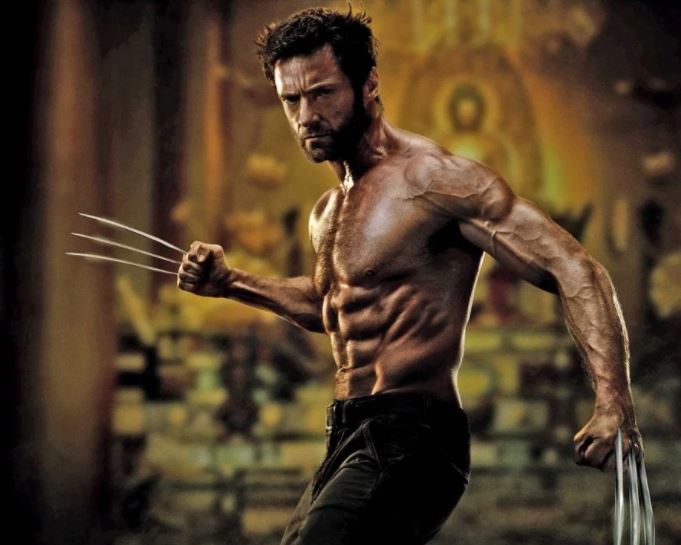 The chiselled grooves and the ‘Wolverine’ bulged muscles are significant reasons for the gym rats to drool over. You got it right! We are talking about THE Hugh Jackman. The one who kept us glued to the television for hours together. The Australian actor started his acting career by stage productions. Initially, Jackman made small appearances in several Melbourne Musicals.

The 1995 blockbuster ‘Oklahoma!’ played a game-changing role in his career. Soon after the bang, he became a popular face in International Cinema. Some of the other masterpieces given by the actor are ‘the prestige,’ ‘deception,’ ‘Van Helsing,’ etc. However, Hugh Jackman is widely known for his infamous character ‘Wolverine’ from the movie series of the same name.

Apart from the theatrical wonders, Jackman is also known for being a health and fitness fanatic. His Greek God-like features are enough for evidence. The 52-year actor is still quite active and motivated to carry on his intensive pieces of training. His daily workout routine lasts for almost 90 minutes. In those 90 minutes, he covers all, ranging from cardio to strength.

You can imagine the level of practice and perseverance needed for the workout routines. However, a proper workout regime must be paired with an adequate diet plan to reach the body’s goals. The myth that carbs and fats are only there to degrade the body is busted over and again by fitness messiahs. Well, we cannot help you retract iron nails out of thin air like Wolverine, but we can show a glimpse of the workout routine of ‘Wolverine.’

The Wolverine Workout: How Do You Get A Shape

There will be very few youngsters who once watched Wolverine and did not want to get a body shape like him. When he joined the wolverine franchise, he faced the challenges of getting the convincing body shape that can make people crazy over the character. As an always active fitness prone person, Jackman worked hard on his bones and muscles to get that geometric shape of his physique.

It was not easy for Hugh to live up to that expectation of the audience for the long course of 17 years. Yes, you heard it right! Seventeen long years, the same physique, the same stud attitude both in his body and mind. Now, how do you get his body shape? Will the Hugh Jackman workout have some impact on your body? It is not easy to develop a physique like Hugh, but it is doable to follow his gym routine religiously and maintain the proper diet.

Hugh jackman’s workout was monitored by the world-famous trainer, David Kingsbury, who divided Hugh’s workout plan into two different sections: bulk and cut. Kingsbury first calculated the calories for Hugh to get him the thinnest possible muscle gain system during the bulk session. He made sure that Hugh should develop the lowest weight during this phase. They worked together on this to build the bulk on Hugh’s body.

Kingsbury started a low-intensity daily schedule and intervals between Hugh to maintain the body fat scale down, even though Hugh was gaining the fat. Coming to the cut phase, Hugh’s training with weight was kept consistent. But Kingsbury kept a constant eye on his calorie consumption and the cardio exercise Hugh was doing during his sessions. The main objective of Kingsman was to develop strength without getting over bulky. Lean and Mean, Buddy!

Kingsbury paid serious attention to the use of weights during the exercise sessions, where he slowly increased the weight being lifted by Jackman. He made a four-week schedule for Hugh where he kept on increasing the weights for the beginning three weeks. Whereas decreased the weight on the last fourth week, but Kingsman increased the repetition of the set of workouts.

Though Kingsman was not particular enough about the method he was following in order to build the body structure of Hugh, he calculated his percentage of weight lifting for each weekly basis. Kingsman made sure that Hugh would make each repetition to its maximum effort, which represents 95% of the workload. In this way, they kept on working the muscle gain, and also focused on increasing body strength.

It wasn’t easy to map a particular method to follow to gain that eye-catching physique in the beginning days. But, with the cooperation of Hugh, Kingsman gradually made it possible.

During his regime of training, Hugh Jackman used to perform every exercise you think of. The strenuous exercise Jackman had done to build his physique can be summed up as below:

Barbell Bench Press: This is the classic exercise for starting from beginners to pro bodybuilders. This exercise exclusively focuses on a certain range of the upper body muscles. You can do this exercise by lying back on a bench with keeping your legs on the floor and eyes straight to the iron bar. Then you need to grip the bar very confidently that it should not flap or fall or get loosen.

Push it up slowly to get it out from the stand. Now you have the confidence to lift it up in parallel to your chest, then slowly lift it down towards your chest. It is to repeat 10 to 15 times per set and 3 to 4 set repetition. Make sure that your hands are perfectly stretched out to both ends of the bar. Only then you can feel the complete effect of this classic exercise on your upper body muscles.

Back Squat: Ever noticed the drooling muscular legs and lower body portion of Hugh Jackman. It is all the magic of back squat. This is often regarded as the king of all exercises for the lower body parts. It increases body strength in an impressive way. One of the most powerful exercises, the back squat can help to develop perfect back and leg muscles for beginners.

The pro builders also follow particular one for their competition at the international level. It develops your hamstrings, glutes, and quads. All you need to do is to stand straight by not stiffing your body. Followed by positioning the bar on your back shoulder and then squat down with your knees pushing either side.

Never forget to be very careful about the amount of weight you are putting on the bar. Excessive weight beyond your capacity can lead to cause serious injury. You need to have particular intervals between your sets.

Deadlift: This brutal lifting is only welcomed if you are not facing challenges with the average liftings. You need to stand up on your feet with your back straight and shoulder wide primarily to begin this brutal exercise. Make sure you are confident enough with the weight. After that, you hold the bar with both hands just little outside of your legs and pull it upwards. Your hand position matters a lot in this exercise.

The thumbs should be against the outer parts of your knee, and you need to lift the bar until the thumbs touch the bar. You must ensure to have a proper grip on the bar before lifting it. keep a 5-6 round-ups and down, and repeat it in 3-4 sets. Here also, the measurement of weight is very important. Never underestimate the weight and choose to limit it wisely.

Being overweight in exercise does not give you proper results. While doing this exercise, your back has to maintain a fixed position, and your hips and knees are to move simultaneously in sync with each other. This exercise will provide you with muscular legs and a strong back.

Weight Pull-Up: This is some average lift up that is not very challenging for one. It can be regarded as an interval exercise for you. It does flex all the muscles and relaxes them when they become stiff after strenuous ones. You do not need any other weight to do this exercise, but your body weight will work for it.

Stand straight beneath the hanging bars fixed onto a wall or somewhere other in your gym, then hold the bars strongly enough to pull yourself up against the bars. Do the pulling yourself up and coming down 10-15 times and repeat that in 4-5 sets to get your entire body muscles relaxed. This will give your shoulder a beautiful shape.

THE ULTIMATE DIET PLAN OF WOLVERINE

Opting for an intensive routine comes with many pros and cons. The muscle aches and leg sprains taste like sweet poison after the workout routine. But do not starve your appetite to stay in shape. In fact, all you need after a workout plan is a balanced diet plan. Jackman altered his physique as per the requirement of his character with the help of his trainer and fitness expert David Kingsbury.

Kingsbury helped the actor to get ready for his roles by introducing revolutionary plans like carbohydrate cycling. For those who have been avoiding the bowl of rice, fearing it will just add extra mass to your thighs, get your carbs right. Carbohydrates are the basic energy providing source of our body. If you are planning to cut it off, your body might face a tough time gaining energy for your strenuous ‘Wolverine’ workout.

Generally, the 52-year actor would love to go for the following diet plan any day:

The Wolverine made us sit at the edge and remain glued to the television for hours. The gym rats would attack any weights and work out any crazy routine to get chisels like their childhood superhero. Hugh Jackman did not get it overnight. Joining the Wolverine franchise was taxing on his physique. Jackman went through challenging workout routines to be ready to play the character on screen. The build-up story of Hugh Jackman lingered to inspire the health fanatics.

Barbell bench press, classic squats, and deadlifts are some of the significant components of the actor’s daily routine. Getting in shape is never possible without a complete and balanced diet plan. A holistic view must be adopted while planning one’s diet. Cutting off carbs and fats is never an option. Roll your sleeves and start crushing the Wolverine workout! Discuss a detailed workout plan with your trainer and fix your diet. Flaunt those chisels!