Dwayne Johnson gained the ring name of “Rock” at the peak of his wrestling days. Who could have imagined the roughy-toughy wrestling personality would stand tall in the box-office game! And that is exactly what he eyed for. “Hercules” did justice to his wrestling days and “The scorpion king” busted the box office in the very first week.

It is needless to say what “The Fast and Furious” franchise was to The Rock. He captured the hearts of both the fitness freak and the cinephile alike. Well, cinephiles have to wait. The good news is that The Rock workout routine is here for all the health fanatics out there. Are you ready to sweat out like a boss?

WHAT MADE DWAYNE JOHNSON “THE ROCK”

The grinding and polishing of Dwayne Johnson’s started quite early. Being in a family of renowned wrestlers, the flair was flowing in his genes. Growing up with the example of his grandfather, Fanene Maivia- The High Chief, and watching his father inside the boxing ring, he was bounded to go for athletics. Young Dwayne was found promising in the game of football. But you cannot bypass destiny. Junior Johnson was deteriorating in football due to multiple and frequent injuries. Unable to see better prospects in playing football professionally, he devoted his time training for wrestling.

Dwayne Johnson initiated his wrestling career with WWE. His first fight in the ring was with Brooklyn Brawler which took place in Texas. The WWE crowned him with his first professional title- Flex Kavana. It was after he joined “The Nation of Domination” when he chose the infamous name “The Rock.” Becoming the finest artist of warfare, Dwayne “The Rock” Johnson.

The muscles and calves that we all aw over are not carved by the Greek God Aphrodite with chisel and hammer. The muscles are the result of all the hard works and dedication. The Rock is happy to share his bite of fitness knowledge with others. His inspiring body goals are often reflected on his Instagram.

Putting a cherry on top, he initiated The Rock workout gear to motivate his peeps for physical transformation. The pandemic catastrophe had geared up the sedentary lifestyle of the generation. We need guidance from the best and attempt to metamorphose the wrongs we already did to this body of ours. Here are some quick tips and tricks from The Rock’s workout routine.

The very first workout routine shared by Johnson is called the JUMANJI workout routine. This particular routine is concerned with perfecting the shape of your back, chest, and legs. Critical portions, right? Each one of us has a huge bank of knowledge about different forms of workouts and exercises.

To some extent, we can dig out which exercise or routine is beneficial to attain which particular body goal. But we are unable to sand our tactics to perfection without a perfect guide. This is where the Rock swooped in. The Jumanji routine is presented at your service:

One of the most crucial things to be remembered when carrying out the Rock workout plan is that Johnson always asks to take seconds of break. There’s no point straining out muscles in the first thirty minutes of a workout. A break of 20 to 30 seconds is usually recommended between each set. Though a long break of 90 seconds is advised when you are repping for your chest.

Dwayne “The Rock” Johnson shared some other legendary workout plans for his followers. Read and follow his “Inside Iron Paradise” workout plan.

FOR HOW LONG THE ROCK WORKOUT

The Rock is in the best shape of his life, as he mentioned in his latest Instagram post. The 46-year-old Fast and Furious star remained a Greek god of dreams for all the gym freaks. We know about the toughest workouts he follows to maintain his bulging muscles. His day typically starts at 4:30 in the morning. One needs an unearthly power to get the newbies to get getting during these hours.

The Rock exercise starts with an hour of the cardio round before his breakfast bell rings. Now coming to the interesting part. Dwayne does not believe in rushing to the gym every single day of the week. He would hit it five or six times. His gym routines are also categorized. He is often found engaged with the regime of weight-lifting. Though he is strangely against the belief of pulling up any weight insight without in motif and plan.

The “Independent” magazine says that the Rock works out for almost an hour and thirty minutes a day. Well, sometimes the time stretches if he decides to hit the workout a second time at night. Read about the Rock’s weekly workout routine. 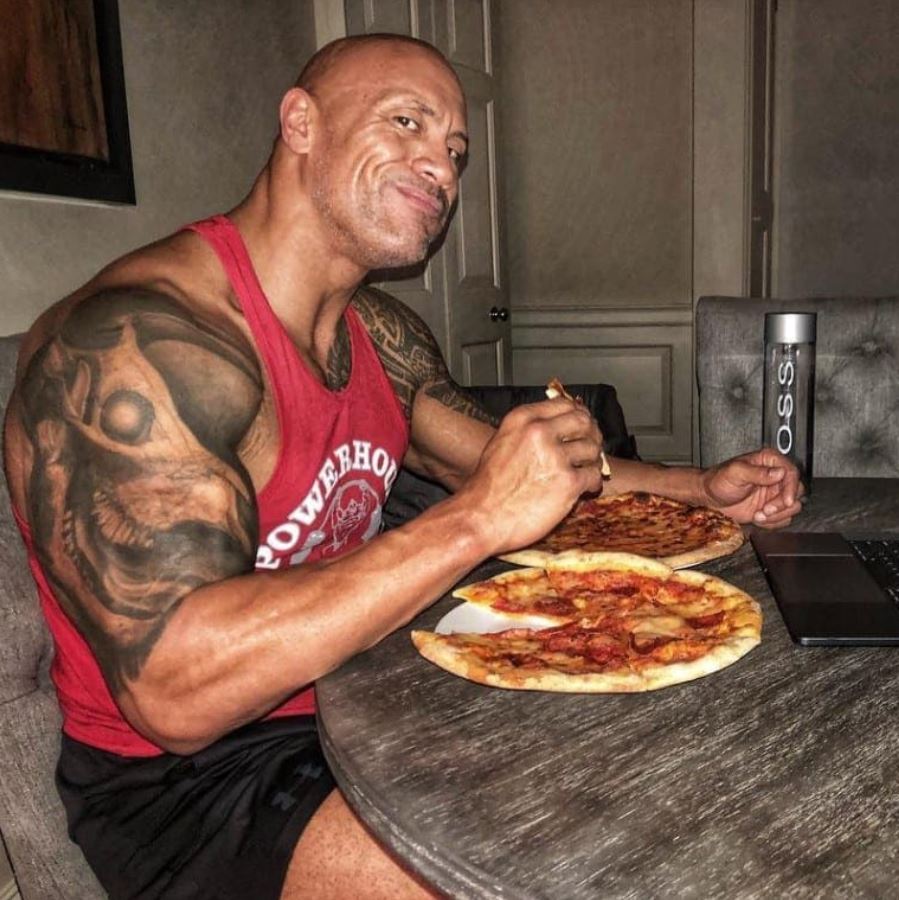 No amount of exercise and workout plan will be enough if you are not eating the right amount of food with all the essential nutrients. You cannot survive only with the help of protein shakes. The A-List athletes of the world are dead against building bodies with food supplements instead of the actual foods.

The carbs and fats get on our nerves and the next best thing we think about is starving ourselves. Living on 6 times protein shakes should not be an option. Additionally, having a cheat day once or twice will not wreck your hard work. Don’t be so hard on your mind.

You will be relieved to know that The Rock is a fan of carbs. While prepping for his role in the movie “Hercules”, the former wrestler was seen gulping down protein-rich meals at all hours of the day. His Instagram stories are evidence of how big a pizza fan is he. We cannot argue there though.

To help you plan your next moves towards a healthy body transformation, here are some tips and strategies from Rock’s diet plan. If you want to maintain your body weight without gaining some extra mass, the following Rock diet is a perfect fit for you:

Every athlete and sportsperson is talking about the importance of carbs and other nutrients in our daily diet. You should not be cutting the goodness of the essential nutrients based on mere misinformation. Don’t believe us? Consult your fitness trainer or nutritionist now.

Dwayne “The Rock” Johnson has been our most favourite WWE fighter. He continues to be a chief in the athletic and cinematic universe. The fitness fanatics are never upset by his constant upshot of encouraging posts and series present all over the internet. The vigour of the Rock workout routine is there for you to plan your next fitness strategy.