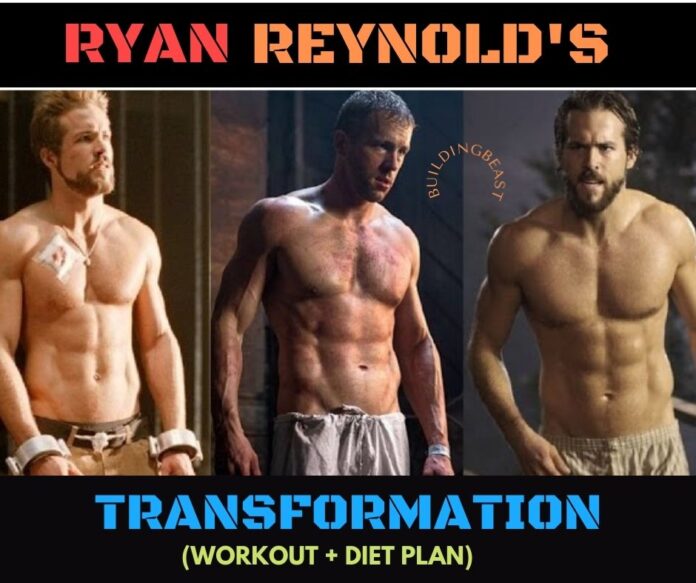 We all know about the successful Deadpool movie actor Ryan Reynolds. Once again he has gotten in the great physique for his upcoming Deadpool movie. He worked so hard and gone through a huge gaining phase to his dream role of Deadpool. How he did this? What was his workout plan and diet? We are going to question all your answers in this program. Yes, Today we are going to talk about Ryan Reynolds’s workout and his transformation.

So if you also want to build a physique like your favorite superhero, then go for this workout program that includes all the workout plans and diet of Ryan Reynolds.

A good warm-up before strength training

Ryan Reynolds was working out with a famous Hollywood celebrity trainer Don Saladino who also trained Reynold’s wife for several years. The trainer claimed that Reynold was actually focusing on building muscular strength. According to Men’s Journal, he used to do a good warm-up before his strength training.

The trainer Saladino stated that “This warm-up is really important as he was lifting heavy to build strength so each muscle of his body needs to warm up.”

Reynold’s warm-up session includes dynamic stretching along with 3 cardio sets (10 reps each) of Turkish get-ups, overhead shovel throws, bounding. “He is getting the body trained for a number of motions.” His trainer stated to the Men’s Journal.

He adds flexibility to his workout routine

Saladino told that they include 2 days off while performing a strength workout plan. “The common mistake people make during their workout phase is they don’t listen to their body every day.” He stated. Ryan was traveling a lot while filming Deadpool, which causes them to change his program routine.

Continued his workout during downtime

In 2016 Ryan Reynolds told that to Men’s Health “Saladino gave me a plan I can perform whenever I needed to”. Ryan is always been a successful and hard-working actor, he had been working out his own when he gets time.

Ryan always loves weight exercises like deadlifts, squats and that was the best part of this transformation journey. Another best exercise he used to perform is walking lunges with 30 to 40-pound weights and a 30-pound weighted vest.

Reynold’s stated in a Men’s health interview that “I usually don’t enjoy cardio. For me, it was very tough to complete 3 phases of cardio”. He was battling during his cardio workouts.

He was always varied about his workout

According to Saladino, There was one effective workout program designed for Ryan Reynolds’s transformation for Deadpool. This workout program was really effective and hard to perform. It helps in building muscular strength and the desired physique as our favorite hero.

According to the previous trainer of Ryan, he used to cook food on his own and eats every 3 hours per day. He used to eat broccoli, black pepper, garlic, and fat-free meat.

Ryan said in an interview “I love vacations with my family. After the whole transformation and completed the shooting, I spend time with my family and enjoyed it.” Ryan has worked so hard for his upcoming film Deadpool. If you also want to train like Ryan then follow the Ryan Reynolds workout routine with a proper nutritional diet.

Training like a superhero is always the best way to build muscles. Have a look at this Ultimate Batman Workout Program.