There are two paths to achieve ketosis.

The first is through the ketogenic diet or fasting, which can take weeks or months for the body to produce its own ketones. The second is through exogenous ketones like HVMN Ketone, consuming ketones through an external source. On the map to ketosis, these are different roads–one more winding than the other.

But how do you know you’ve arrived at ketosis? What positive things are you looking for? What negative symptoms might you encounter? Here, we discuss what signposts to monitor your ketosis.

Unwanted Symptoms of a Ketogenic Diet

Being Aware of Your Ketosis

Ketosis is a normal metabolic state marked by higher-than-normal levels of ketones (or ketone bodies) in the blood.

Endogenous ketone production denotes ketones produced naturally by the body. It’s the body’s natural adjustment to the absence or restriction of carbohydrate in the diet. Without enough glucose from carbs to fuel its cells, the body turns to fat to replace glucose as its primary source of energy. In the liver, fat that is not burned for energy directly is converted to ketones. This means that you are in a ketogenic state. Ketone levels increase in the bloodstream and provide an alternate and efficient fuel source for the body and brain. As a result, muscle protein is spared from being converted to glucose for energy.

Two paths, one destination. Here’s what to look out for to ensure you’re in ketosis. 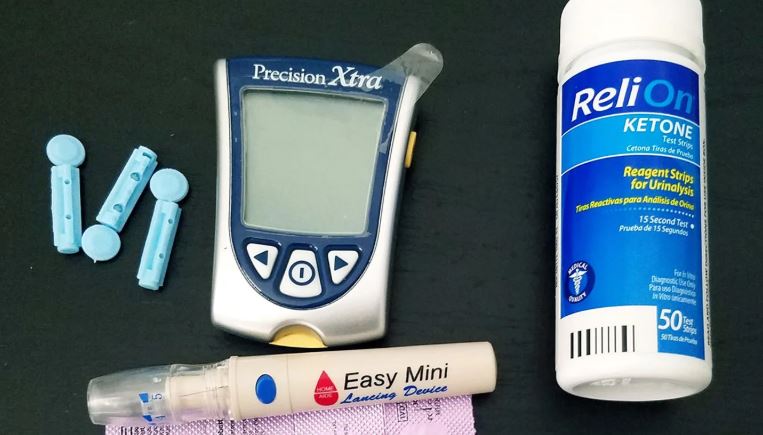 A blood ketone level of 0.5 mmol/L is widely acknowledged as the threshold for entering ketosis.1 Using a measuring device is the best way to know you’re in ketosis, with different devices measuring the presence of ketones in the breath, blood and urine, to provide an exact biomarker of your level of ketosis.

Measuring ketosis through blood is most accurate. Blood testing is reliable for quantifying both endogenous (created by ketogenic diet, fasting, exercise) ketones and exogenous ketones such as HVMN Ketone. Urine and breath measurements are less reliable but can be useful as quick, noninvasive ways to approximate blood ketone levels.2

Unwanted Symptoms of a Ketogenic Diet

The ketogenic diet remains the most common approach to trigger a state of ketosis. Low in carbs, high in fat and low/moderate in protein, carbohydrates are typically reduced to less than 50 grams per day. It’s this depletion of carbs that result in the body becoming ketogenic.

Along with biomarker testing, subjective symptoms can provide an indication of your ketosis. Sometimes, early side effects of the diet result from carbohydrate withdrawal. This can be known as the “keto flu;” symptoms include nausea, fatigue, headache and dry mouth. They’re short-term, typically lasting about a week or less. Keep in mind, however, that we are all different. Our bodies react in different ways. Some of us may experience these symptoms later than sooner, to a lesser extent, or not at all.

Let’s dive into some of the other potential side-effects of ketosis. 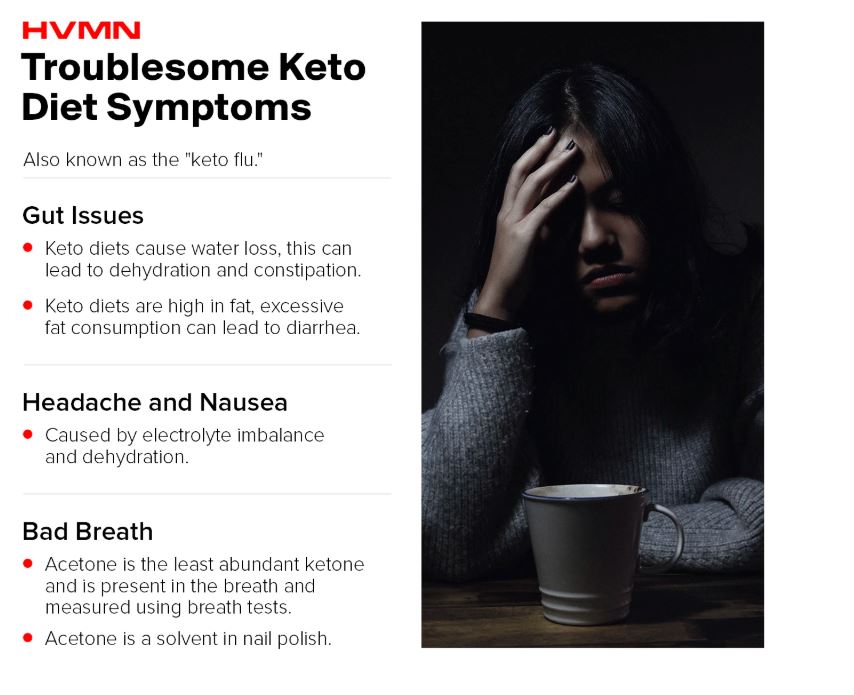 Glycogen is the body’s stored form of carbohydrate for energy. It’s found primarily in the liver and muscle cells. Each gram of glycogen is bound with 3 to 4 grams of water.3 On a low-carb diet, the body will burn through these glycogen stores, releasing a lot of water and causing frequent urination.

As insulin levels plummet from carb-cutting, more water is flushed out, along with excess sodium (in contrast, excess insulin from carbs causes sodium and water retention).4 In some people, dehydration contributes to constipation, which can also result from avoiding fiber-rich carbohydrate foods. While less common, diarrhea or loose bowels can be triggered by a number of factors including too much or too little fat, dairy intolerance, or changes in gut flora.

Many people on the ketogenic diet never experience gut problems. Those that do can try combating them by drinking plenty of water and mineral-rich broths, and eating more non-starchy veggies along with foods rich in fat and fiber (such as nuts, nut butters, and avocado).

As glycogen stores become depleted and water attached to glycogen is released, rapid weight loss in the form of “water weight” occurs.

Once glycogen stores run out, however, ketosis kicks in as body fat is burned. Strong evidence supports the use of ketogenic diets for long-term weight loss. The appetite-suppressant impacts of ketosis leading to decreased calorie consumption is considered to be the most plausible mechanism through which the diet works.5

Acetone, the least abundant ketone, is present in the breath and is responsible for the unpleasant odor. Acetone is a solvent in nail polish, if that gives you an idea of what it might smell like. But it’s not as bas as it sounds; acetone breath is a sign of ketosis and fat burning. It’s the ketone measured in breath tests used for detecting ketosis.6

After several weeks of keto dieting, ketosis breath typically dissipates. To help, drink more water and use breath fresheners. If it’s unbearable, consider adding just enough carb back into your diet to avoid bad breath while still staying in the ketosis zone. 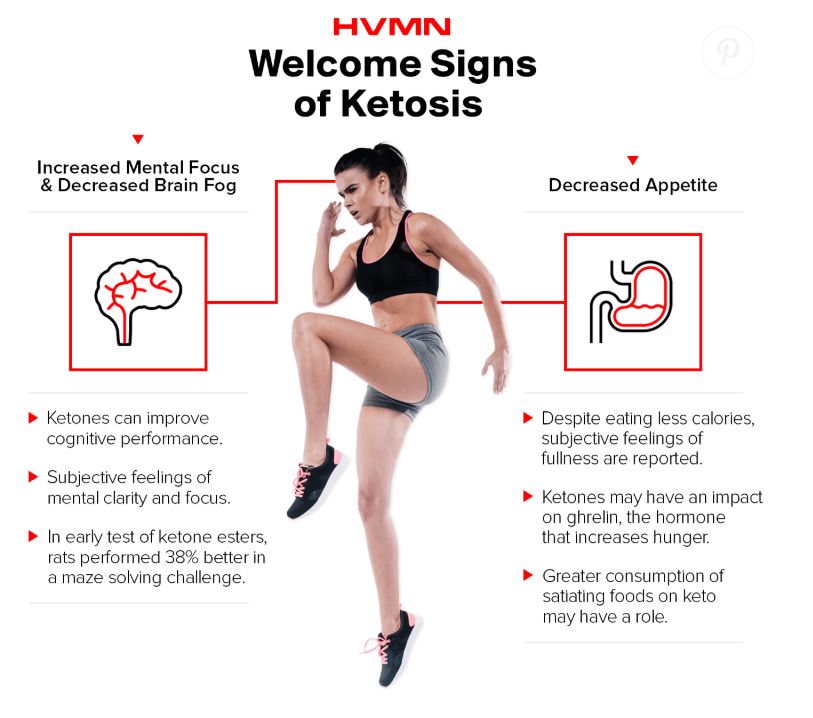 Studies have shown ketones can improve cognitive performance.7 The brain uses ketones as a fuel source when carbohydrate depleted. Beta-hydroxybutyrate (BHB), the major ketone body, is more efficient than glucose. It also stimulates production of new mitochondria – the energy factories in our cells.8

When HVMN Ketone was tested in mice, they performed 38% better on a maze solving challenge, so it’s possible there may be a cognitive boost for humans also.9 While following a ketogenic diet, you avoid the energy peaks and troughs that come from quick-energy carbs. Producing ketones from stored body fat provides the brain with a steady, sustainable supply of fuel.

One of the first symptoms you might notice when on a ketogenic diet is that it kills your appetite.

People on the diet report being significantly more full and satisfied. Even though you may be ingesting LESS calories on the diet, your hunger doesn’t increased. One possible explanation is greater consumption of satiating foods, primarily protein and fat. However, multiple studies indicate that the state of ketosis itself (apart from effects from food) plays a role as well.10

High levels of circulating ketones may have a direct appetite-suppressant effect. In fact, the exogenous ketone ester used in HVMN Ketone rapidly increased blood levels of beta-hydroxybutyrate and lowered appetite as well as levels of ghrelin – the hormone that increases hunger. While this still needs to be explored further, it is possible that exogenous ketones may be useful for appetite control as part of a holistic weight loss strategy.11

In nondiabetics, ketosis (also called nutritional ketosis) is regulated and controlled in the body so that ketone levels never reach the harmful levels associated with diabetic ketoacidosis. Ketoacidosis is an acute, life-threatening condition that occurs in severely uncontrolled diabetes (mainly type 1) when ketones rise to massive, supranormal levels.

Since the body’s acid-base buffering system cannot neutralize the vast amount of acidic ketones, the blood pH drops significantly. This buildup of acids in the blood poisons the body and can lead to ketoacidosis.12 Breathing becomes deep and rapid as the body attempts to compensate for excessive acids. Other symptoms of diabetic ketoacidosis include:

Importantly, this dangerous condition is rare in non-diabetics following a ketogenic diet, and in people taking exogenous ketones. Sticking to the recommended dose of max. 3 drinks per day of HVMN Ketone, there is no risk of ketoacidosis.

Being Aware of Your Ketosis

Ketosis is the body’s normal physiological response to a shortage of carbohydrate fuel.

It is characterized by elevated blood levels of ketone bodies, or ketones. Ketosis is a healthy, natural state that shouldn’t be confused with ketoacidosis, a dangerous and potentially life-threatening complication of diabetes.

Elevated blood ketone levels is the sign of ketosis, while certain subjective symptoms can also signal ketosis. Increased mental clarity, less brain fog, and diminished appetite are fairly common among people in ketosis. The ketogenic diet specifically has its own assortment of symptoms. Fortunately, the negative symptoms such as constipation, diarrhea, and bad breath are often temporary and tend fade as your body becomes better at fat burning and naturally producing ketones. The positive symptoms of ketosis coincide with higher levels of ketones in the blood. This may occur after several weeks of adhering to the ketogenic diet or very shortly after ingesting exogenous ketones.

How do you achieve ketosis? 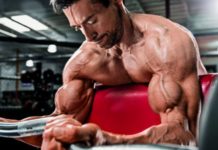 Dangers of the Keto Diet Debunked